There is a double debut appearance and a special return of a popular girl making this a memorable addition to exclusive “Flight Attendant” spanking series. Helen Stephens alongside newcomer, Jessica Taylor… a fantastic, strict female top, the inimitable Ophelia de Havilland.

The disciplinary auditor is called into one of the airline’s hubs to investigate two flight attendants, Helen and Jessica, who have been summoned to face the fearsome Miss de Havilland. the girls are nervous, and understandably so as the auditor reveals her investigation shows that they have been stealing and falsifying accounts at the airline’s expense.

Furthermore, the girls had foolishly stashed away some of the Duty Free which they had acquired over the past year in their personal lockers. This was discovered on opening them to find proof of their misdemeanors. There are only two options, immediate dismissal, or discipline, the old fashioned way! The girls choose the discipline, thinking this will be just a light spanking girl when they are told. How wrong they both are! Each girl is taken over the lap of the auditor as they are spanked in front of each other.

They think this is it, but it is just the start. Next, they lose the dignity of their panties, receiving a harder bare bottom, over the knee spanking as well as a double leather strapping. The girls are in shock but want to keep their jobs so comply dutifully.

It is still not over, as Miss de Havilland cruelly makes the girls face each other over the table, their underwear halfway down their legs, as they are strapped in turn. This is rather emotional and brings very real tears to Jessica and a new genuine contriteness from Helen. This auditor knows her stuff and it is safe to say both girls have learned a valuable lesson of punish girl! 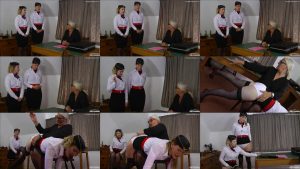